With 'The Royal', BURCO GROUP and GALIKA DEVELOPMENT bring more life back to Brussels city centre 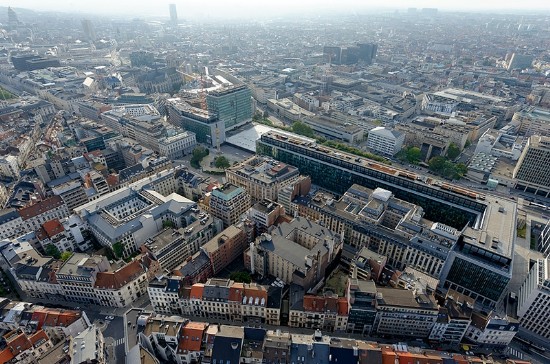 Burco and Galika have just inaugurated an ambitious development on one of the most prestigious roads of the capital  the Rue Royale. Just a stones throw from the Congress Column and the eternal flame, The Royal has seen a former office building converted into 77residential units, from student flat to penthouse. The ground floor level on the Rue Royale side (the building also faces onto the perpendicular Rue du Gouvernement Provisoire) remains retail.

One of the principal objectives of this high quality conversion was to continue with the impetus to bring new inhabitants back into the centre of Brussels. This point was emphasized by the councillor for Town Planning and Heritage, Geoffroy Coomans de Brachène, who added a particularly pertinent remark when he said that some years ago, his wife turned down the idea of living in this district. The ongoing developments, such as this one, have changed the perception and the reality of this zone. This is also clearly demonstrated by the ultra-rapid sale of all 77 units, enabling the project, as Burco CEO Thibaut Dumortier pointed out, to be largely self-financing. Among features which reflect the transformation in thinking where residential property is concerned, is the fact that the inner courtyard, which used to be a parking area with several entrances from the street, is now a garden.

To sum up what the city of Brussels and those developers willing to take up the challenge are trying to achieve in terms of city centre living, the inauguration was marked by a pertinent piece of street art. Artist Denis Meyers created the slogan during the event, and the photo shows him putting the finishing touches to We cant solve problems by using the same kind of thinking we used when we created them (Einstein). The photo also shows Geoffroy Coomans de Brachène making his point, while Thibaut Dumortier and Galika CEO Anne-Catherine Galetic, look on.

Other main players in the Rue Royale development were Art Build architects and CIT Blaton.