You are here : HOME > NEWS > Lunch with a pragmatic Swiss architect 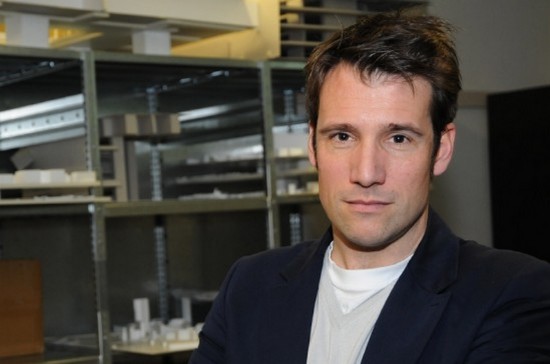 For the first Lunch with an Architect of 2018, Forum Press and Communication (Kathleen Iweins and Nathalie Zalcman) yesterday invited Swiss architect Emmanuel Christ of Basel-based Christ & Gantenbein. The bureau employs over 50 persons, and has some prestigious buildings to its name, including the Kunstmuseum in Basel and the (ongoing) Lindt Chocolate Competence Centre. Other major projects are also being undertaken in Germany and France.

Emmanuel Christ used some of these projects to illustrate his philosophy of architecture. He used concepts such as Architecture as Culture, and the issue of history  continuity versus change. On this subject, Emmanuel Christ said that transformation and reinterpretation are among of the most valuable things that architects can do for society. And in the same vein, architecture has to be both specific and individual to a project, and more traditional/typical, otherwise it will not survive past the generation in which it is born. Turning to some of the monumental architecture of the past, he also said that a reconsideration of the notion of monumentality is now believed to be possible, the question being simply how to do it.

Some of the images of projects which were used to demonstrate the philosophy showed atypical shapes (strangely bent buildings, non-straight facades) being deployed in order to blend a new construction into its older surroundings. And the duality housed in this idea stretches to materials selected  marble alongside galvanised steel in a museum designed by the bureau, was a perfect example. pragmatism requires, of course, that however fine the ideas, the buildings still have to fit into the space allocated to them.

There were two issues which led to a degree of criticism from Emmanuel Christ. Firstly, he pointed to the generalised manner of building social housing: a standard and probably uninteresting layout with a bit of green paint applied to the facades to try and disguise this approach which he described as cynical.
Secondly, in response to a question about the relationship between the city and the countryside, his response was as pragmatic as the rest of his philosophy. He spoke of some of the urban constructions, in France in particular, being so covered in vegetation that you could hardly see the building. He said it was pointless to try and pretend that this was not a city, but that somehow we were on the Côte dAzur A city is a city, with buildings, so dont try and hide it.

We may soon be seeing Emmanuel Christ at work in Brussels, although he wouldn't elaborate... But when he mentioned that there were some 'interesting garages' in Brussels, there was a knowing ripple of laughter from the audience.