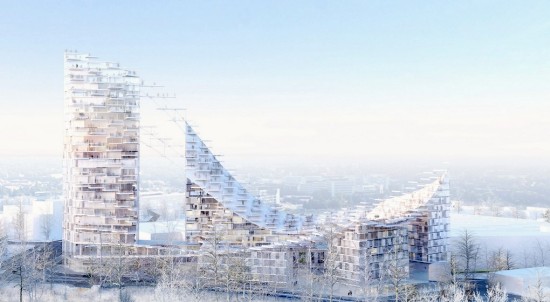 There is significant news concerning the proposed new tower to be constructed at the Delta site in Auderghem. It has been announced that the Japanese/Belgian association of Sou Fujimoto Architects and AWAA has won the international competition for the design of this tower. To do this, the team had to beat 26 other candidates. Having been launched by developer Unibra and construction company Thomas & Piron, the call for tenders set out to find a proposal for a new mixed-use urban development of between 25,000 and 50,000 square meters. The location is significant as it is at the corner of the Herrmann-Debroux viaduct and the Boulevard du Triomphe, and alongside the recently completed Chirec hospital.

The first artistic impressions provided by the team for the project show a series of residential high rise buildings above a mixed-use podium. The various structures would appear to be inter-connected at certain points. There is a long way to go, as the project cannot begin for at least eight years, due to occupation on the site by the State buildings agency (Régie des Bâtiments) up to 2025. When it is finalized, the complex is likely to include retail, a hotel, a gym, offices and a cinema to complement the residential accommodation.
Realestate
Tim Harrup
13-12-2017