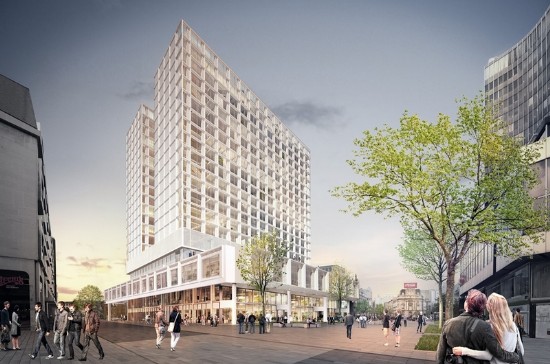 Broker and real estate advisor JLL has undertaken an in-depth study of the retail scene in central Brussels. It starts off by saying that following the terrorist attacks, footfall has picked up again but the rise of e-commerce, new shopping opportunities elsewhere in the Capital and the run down condition of the infrastructure in the city centre required a response from all parties involved.
The public authorities have launched various initiatives which are in different stages of execution and which aim at increasing the quality of life, shopping and mobility.

Amongst these measures, the pedestrian zone in the Brussels city centre has been extended. It now covers over 50 ha which makes it one of the largest in Europe. JLL says that from a retail property point of view, the pedestrian zone is a good idea as it will enhance the shopping experience and as such, differentiate the offer in the city centre from the offering in other locations. The prime high street in the country, the Rue Neuve, is undergoing important redevelopment works. They started end May 2017 and will extend over approximately two years. The works include the side streets of the Rue Neuve with the objective of extending the central shopping area to the side streets and eventually the Boulevard Adolphe Max.

When it comes to attracting brands into the centre, JLL has spoken to Brussels Trade and Employment Secretary Marion Lemesre, who confirms that Entreprendre.Brucity is conducting a prospection campaign with various brands currently not established in the city. Brands that would increase the quality of the commercial mix are targeted. Asked about competition from shopping centres, she says: Docks Bruxsel and other shopping centres do not represent competition but a complementary offer compared to that of the city centre. On the one hand, street shopping targets a different clientele than shopping centres. On the other hand, the commercial offer is much richer and diverse in the city centre. And she also says that the City has obtained for the Pentagon (perimeter delimited by the inner ring road) recognition as a tourist zone in order to attract a new public to downtown Brussels and meet inhabitants and tourists demands. Shops have the possibility to open 7 days a week.

In its survey, JLL has also looked at some of the private sector initiatives in city centre retailing. These are, firstly, The Mint (formerly La Monnaie) by AG Real Estate, where the retail part of the project has an area of 15,000 m² spread over 20 units. Then comes the former Philips twin towers just opposite, now to be called Multi Tower, which has a renovation scheduled for delivery in 2020, to be followed by tenant fit-out. Alongside this is Crystal City which will offer 2,500 m² of retail space on the ground floor and mezzanine, in modular units with a height of 5.5 m. The retail area is divisible into 4 to 8 unit shops.

On the Rue Neuve, JLL of course speaks of City 2, the largest shopping centre in Brussels city centre and one of the largest in the country. The interior of the mall is to be completely renovated by AG Real Estate, in phases over an 18-month period. In order to limit the disruption, works will essentially take place during the night. The lay-out will be modified and the entrances enhanced to give more visibility.

All in all, there is a lot going on in the city centre in terms of retail, all of which should help to increase the attractiveness of Brussels.