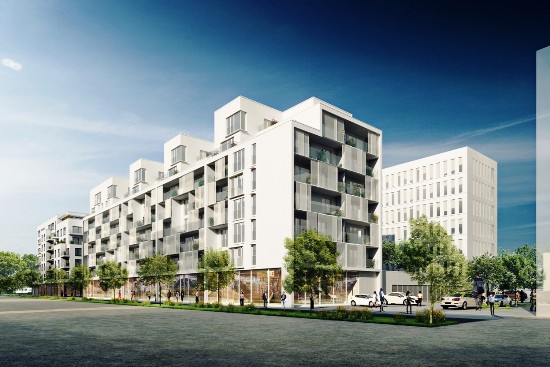 Atenor is involved in major projects within three of Brussels strategic zones: the European district, canal and South Station. On the occasion of issuing its third quarter report, the developer has given an update on how these projects are progressing.

Starting in the European district, construction works are continuing on The One with the target of provisional delivery at end 2018. The structural works will be completed by the end of November 2017. On the commercial side, 41% of the apartments and the two ground-floor retail spaces have been sold (excluding reservations). Atenor also points out that at a press conference held on 3 October, Belgiums Deputy Prime Minister Didier Reynders said that Brussels was ideally positioned to become the new headquarters of the EMA (European Medicines Agency), currently based in London. The One building was selected as Belgiums candidate. The final political decision is expected by 20 November 2017. Contacts are also being pursued (but on hold until 20 November) on multi-tenancy office leases. The appeal to the Council of State brought against the building permit by well-known associations has not progressed.

Where Realex is concerned, and despite the existing permit for the construction of 42,000 m² of office space, Atenor says that it has been decided to postpone the launch of the project pending an (apparently imminent) call for projects from the European institutions. It is within this context that Atenor proceeded in March of this year with the acquisition of the VDAB building and its direct neighbour, creating the possibility either to extend the Realex project, or to develop a new project of 10,000 m².

Moving on to the canal, phase one of construction works on City Dox and the sales process relating to the building of 93 apartments (29% of which are already sold), 8,500 m² of integrated business services, 71 service flats (13% sold) and one rest home, i.e. 39,500 m² in total, are continuing for a delivery mid-2018. The application for the subdivision permit for phase two of the project, of a mainly residential nature introduced in May 2016, is still in progress. This second phase incorporates the development contract launched by CITYDEV.

Finally, the ever contentious and apparently immobile South Station district, and Victor. Atenor says that the master plan for the Midi district should be granted regulatory power on the basis of the provisions set out in the new COBAT recently adopted by the Brussels Parliament (Drafting of a Development Master Plan: PAD). On the issuing authority's suggestion, Atenor will study, once the planning framework has been established, the launch of an architectural contest integrating the latest parameters set out in the master plan. Following this contest, and in parallel with the PAD's planning appraisal, the building and environmental permit applications will be filed as soon as possible, with a view to executing the Victor project, as indicated in the Government's programme.