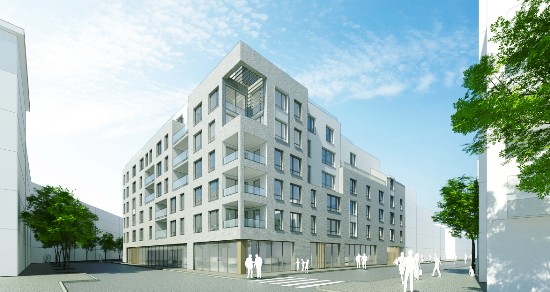 An industrial site in Molenbeek has been acquired by HIB Belgium for redevelopment. The site is located on the Rue Brunfaut, which runs from the Chaussée de Gand at the canal end (around 100 metres from the canal at the porte de Flandres). It was for many years home to one of the oldest printing businesses in Brussels  Hayez  which moved to new premises at Haacht a few years ago, following a merger with another printing company. Just a handful of years earlier, Hayez had invested heavily in the Rue Brunfaut site, with new constructions and a new print-shop with latest generation machinery.

The printworks will be entirely demolished and a new complex of over 10,000 m² will be constructed on the site. This will comprise 93 residential units of various sizes, an office/services area at ground floor level and an underground car park. In keeping with the times, a kitchen garden will be located on the roof of the new building, and many bicycle parking spaces will be provided. Works will start over the next weeks and are scheduled to last until around September 2019. As part of the overall complex, some of the charges paid to the commune of Molenbeek will be used to redevelop the Place Blanche just opposite  known locally by this name because of its total lack of character at the present time.