You are here : HOME > NEWS > Coronmeuse moves to concrete stage 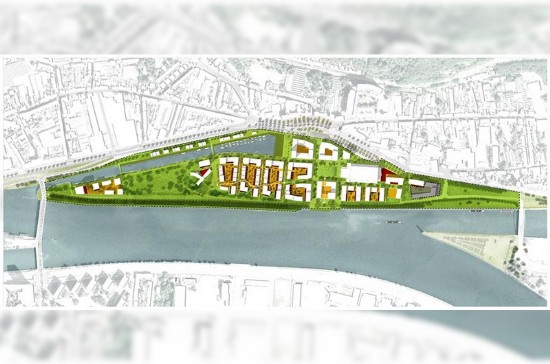 Details have been announced of a vast urban regeneration project in the Coronmeuse district of Liège. Some 15 years of work will be necessary to create a new eco-district over four phases, and including several hundred new housing units. These will be made up of individual houses, a number of low rise apartment buildings and some slightly higher of around 12 floors. Floor areas will be from 65 m² to 140 m², and the units will be from one to four bedrooms. Other facilities will include local services, short circuit trade and local production, senior citizens accommodation, crèches, a communal hall, a covered bio-market and more. The Coronmeuse project will also be cyclist and pedestrian friendly. The banks of the river will be renovated and a yacht marina created. The project is being managed by a public body  ImmoCoronmeuse  which has just awarded the contract to the NeoLogia consortium. This consortium is made up of two major players within the real estate world  developer CIT Blaton and dredging specialist Jan de Nul. The project extends to some 25 hectares and is located on a site which was earmarked for the 2017 International Exposition, which Liège failed to win. The exhibition was awarded to Astana in Kazakhstan. It should be noted that the original idea for an eco-district formed part of the candidature and presentation of the City of Liège for this Exposition. On its own web-site, the City speaks of having taken the decision to pursue the eco-district as soon as the nomination of Astana was announced, back in 2012. The latest move  the designation of the contracting consortium  thus sees the project moving to a concrete stage. The principal existing buildings of this site are the FIL exhibition hall, which will need to be demolished, but which is scheduled to be rebuilt on the other side of the Meuse in the Bressoux district, and the skating rink, which will be retained and restored. The total investment for this project is 313 million Euros. This investment will come entirely from Neologia, and the City of Liège will become the owner of the public elements (infrastructure, passageways, river banks) free of charge.
Realestate
Tim Harrup
03-07-2017