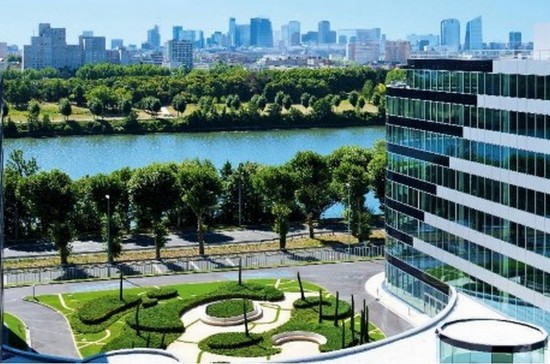 Atenor, already active outside of Belgium and in particular in Hungary, has announced that it is launching its first office project in the Paris region. It will be acquiring, through its French subsidiary, subject to the issuing of the deed of sale on 7 July 2017, a site of approximately 7,000 m² located in the Péri-Défense market Bezons, on the banks of the Seine.

The seller of the site is Sequano Aménagement, a French semi-public company active in development and construction. The site has a building permit for an office building developing approximately 32,500 m² above ground.
For this development, Atenor has set up an office in Paris. The project will be executed in partnership with a company under the umbrella of the directors of HRO, a reputed French Project Management company that has developed around 600,000m² over the last 20 years, mainly in the Péri-Défense sector. Atenor will hold 95% of the joint venture.

The site accessibility is excellent, both by public transport (including the T2 tram at the foot of the site, connecting it to La Défense in 12 minutes and to the Gare de Garenne Colombes in 7 minutes), and by road (at the exit of the A86 motorway). Atenor plans to submit a new building permit application, as soon as possible, enhancing the building currently authorised, in particular in sustainable development terms, to then start building as soon as the permit is obtained.

To draw a comparison with Brussels, the Paris office market saw take-up of 2.4 million square metres in 2016 ((around seven times more than Brussels) and prime rent currently stands at  760/m²/year (2.5 times higher).