You are here : HOME > NEWS > Key West on the starting blocks

Key West on the starting blocks 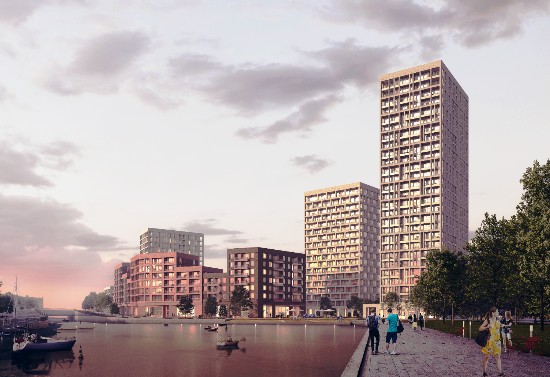 One of the largest projects yet seen in the canal zone has reached the point of being launched. BPI Real Estate and Immobel are launching the transformation of a former industrial site next to the Brussels canal. To be called Key West, this will be a mixed project, say the developers, where living, working and leisure time connect with one another. More than 500 apartments of various sizes, offices, a day-care centre and shops on the ground floor will contribute to the revitalization of the neighbourhood at the bend in the canal next to the Crickx Park and Cureghem.

The developers and the international architects team of Henning Larsen Architects and A2RC have looked at sustainability for Key West in the broadest sense. In addition to the traditional concerns about sustainable energy and efficient mobility, work has been done on creating more light, air and space. The entire neighbourhood will benefit from a public esplanade alongside the water. At the heart of the project, a private garden will be created for the residents of the complex. All patios are south-west facing and offer views over the canal. The roof of one of the buildings is reserved for urban agriculture and space is made for various production activities and workshops. There will also be retail premises with a supermarket, cafés and restaurants.

In terms of timing, Key West is currently at the public enquiry stage, and is expected to receive its permit in the summer. This would allow six years of construction (to completion) to begin early next year.

The location of Key West is just on the city side of other major developments in the area between the Abattoirs and the Ring, and is a further stepping stone in the complete rehabilitation of the canal zone. When the Brussels Capital Region first made this zone a major development priority some years ago, it stated that this was not merely to regenerate a run-down part of the city, but also a way of using the canal as an attraction in the same way that other cities are able to use their rivers.