You are here : HOME > NEWS > Atenor results and portfolio progressing 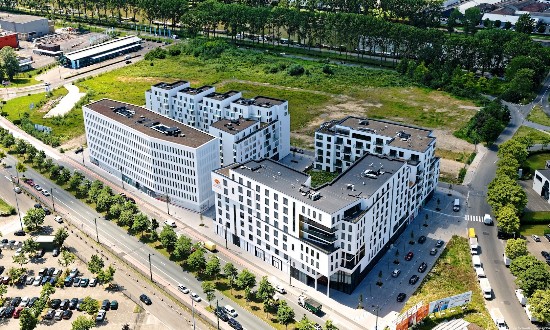 As each year, developer Atenor has just given details of its financial performance over the previous year, along with the current position of its portfolio. Firstly, an overview of the results. The companys strategy is for predictable growth, and it saw this again in 2019. The consolidated result after tax was up by 7.39% to 37.78 million Euros, while operating profits were up by 14.9% to 42.94 million Euros. The results arose by a vast majority from activities in Brussels (60%) with Bucharest, Luxembourg, Wallonia, Warsaw and Budapest making up the remainder. The office sector accounts for almost all of the result at 91.7%, with most of the remaining small part in residential.
Moving on to the situation of the portfolio, Atenor says that its 2017-2021 strategic plan is still on course, namely to be an urban developer aiming to grow its portfolio in those cities and regions with the highest potential. Risk management in terms of project, locations and sources of financing remains the strategy.

Projects portfolio
Atenor currently has 28 projects underway totalling around 1.2 million square metres. These are located in 13 cities across 8 countries, with half of these in Brussels and Warsaw (25% and 24%). Offices represent 74% of these projects, residential 19% and retail 7%. A closer look at those projects in the Brussels Capital Region shows that The One on the Rue de la Loi in the European district has seen its 29,500 m² of office space sold to Deka, and a rental agreement for the whole of this space is underway. This project also includes 9,740 m² of housing. Neighbouring Realex (58,400 m²) is still the subject of discussion where the installation of the European Unions future conference centre is concerned.

On the banks of the canal in Anderlecht, City Dox is a mixed use project of around 120,000 m² and marketing is progressing. Regus and Unilever have already signed up for almost two thirds of the office space. The 32,000 m² of residential and services (phase 2) are also being marketed.
Victor, the everlasting project to revitalize the run-down area around South Station, has been reworked to include 100 or so affordable and passive residential units. Other projects underway include the CCN (North Station) and Beaulieu (Delta). It should ne noted that in many cases the projects cited are in partnership with other developers.
Realestate
Tim Harrup
17-03-2020