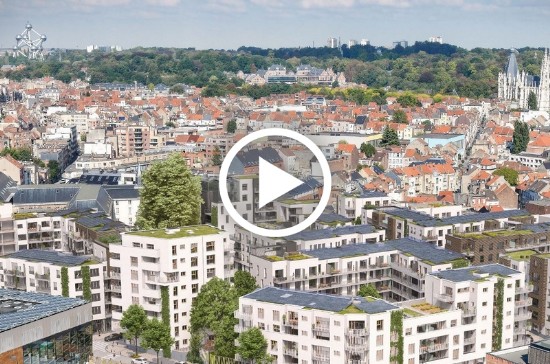 The sheer scale and ambition of the Tivoli Green City project by citydev.brussels has already led to it being awarded a number of prizes in the architectural/urban domain. It is therefore not surprising to find the project selected to be a finalist in this years Mipim Awards, where it had to prove its merits in front of dozens of other contenders from across the whole world.

The objective of citydev and of the Brussels Region is to create a sustainable district, exemplary in terms of construction, energy use and social inclusion. Some 70% of the housing will be subsidised, and the rest made available as social housing for rent; The housing is subdivided into a number of lots, each designed to have its own identity. The architecture differs from one to the other, as do the functions included.

On overview of the first phase of project in terms of what it provides, amply demonstrates its scale. Along with the much-heralded Greenbizz company incubator with its focus on small scale production and the circular economy, are to be found: 397, passive energy residential units, 2 crèches, 7 retail units, a public service unit, 291 underground parking spaces, 650 bike parking spots, new roadways, a 2,000 m² planted square and a 1,000 m² mall. Green roofs (mini urban farms) and common laundry facilities form part of the equipment of the buildings.

The location of Tivoli Green City ensures that it forms part of a much wider regeneration of this entire zone. It is just a couple of hundred metres further down the Avenue du Port (although it is located just off this avenue) from the rapidly developing Tour & Taxis, which itself offers a large amount of housing. Just on the other side of the canal is Upsite, the tallest residential tower in Belgium.

The official inauguration of Tivoli Green City was considered to be sufficiently important to attract the presence of King Philippe, and few real estate developments can boast of that.

Nominated for a MIPIM Awards

Last January, the jury of the MIPIM Awards selected 45 outstanding real estate projects from 19 countries in 11 categories. Tivoli Green City has been nominated as finalist in the Best Urban Project category. The belgian project will have to beat off challenges from France, Poland and Russia.

After the cancellation of the MIPIM mid march due to the COVID-19 pandemy and the compulsory lockdown, the MIPIM Awards will now become a key component of Paris Real Estate Week organized by Reed Middem. The awards winners will be selected on a 50:50 basis, with delegates votes carrying equal weight with the jurys own votes.

Those accredited to MIPIM 2020 and the Paris Real Estate Week will be able to vote online for the projects of their choice between 17 August and 11 September. The winners will be celebrated in Paris on September 15 during the awards ceremony and dinner.
Realestate
Tim Harrup
21-02-2020