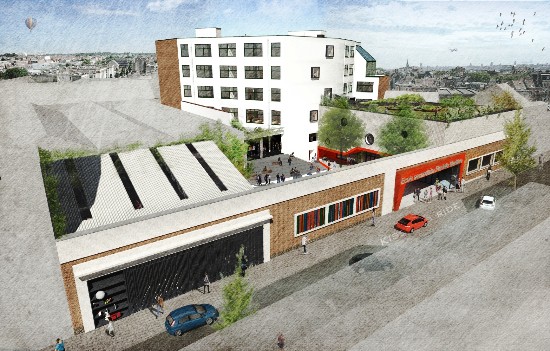 Yesterday saw announcement of the winners of the fourth annual be.exemplary architectural competition organised by the Brussels Region. This competition  which elects a number of winners in each of three categories and awards them financial help with their projects, is designed to promote quality architecture and urban planning, encourage a social aspect to projects, and have a positive environmental and circular economy impact.

Brussels Region Urban Planning and Development Minister Pascal Smet was present for the entire event, and had some interesting points to make in his presentation. He spoke of changing the culture of architecture and planning in Brussels, encouraging architecture which is not grey but which people like to look at. Every building constructed, he went on to say, helps define the identity of a city, and this is why the whole process is so important. He also highlighted the necessity of public-private action, and said that everyone has to be involved in decision-making, not just the politicians, or a commune, or the Bouwmeester, but all together.

There were a total of sixteen projects selected to receive the financial help, spread across the three categories. Category one is small private projects of a maximum of three residential units. These are therefore around the 150-300 m² mark, and five such projects were chosen: Projet 506, Maison Jupiter, Tiny Little Paradise, Rasson V2 and Maison Sans Souci. The first two of these are, by chance, located very close to the Place Albert new building in Forest, in which the event took place, and a be.exemplary winner in 2016.

Category two is large private projects and this category really demonstrates the diverse nature of the competition. For example, along with Maison Jolly, Vas 13, NVKVV and AG Campus are to be found two other winners: the renovation of former post office Ninove 122 into housing and totalling just 565 m², and ZIN, the 110,000 m² renovation project for the former WTC I + II towers in the North District!

Category three is for public projects, and the five winners are Ecole Sécondaire Plurielle, converting a former industrial site into a school in Molenbeek, Ursquare EFRO, Novacity, Mariëndaal and Vandeuren.

The winning projects have to meet a number of requirements in order to be awarded their subsidies, including being completed within 48 months. Pascal Smet pointed out that over the previous three editions, almost 10 million Euros has been grated by the Region.