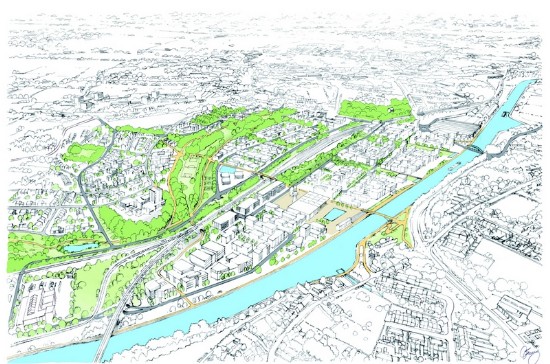 The question of where to build new housing has been occupying the minds of politicians and planners for some time. This question is now the subject of a public debate in Wallonia, where the new SDT (Territorial Planning Framework) has gone into the public enquiry stage this week.

This proposed legislation will set objectives for the use of Walloon land over the next thirty years.

As Editions & Séminaires (Laurence de Hemptinne) points out, one of the key elements of the new proposal is referred to  somewhat simplistically  as Stop the Concrete. This in fact alludes to a notion that is well-established among planners and others across the world: it is better to build in areas that have already been designated for the purpose (cities.) than to continue eating up our countryside. It is also a fact that from an energy point of view, mass housing such as high-rise apartment blocks, consume less than individual houses. In concrete terms in Wallonia, the SDT proposes that building on new land should be restricted to six square kilometres per year by 2030 and zero by 2050. Housing in particular should be located in the heart of towns and villages.

There are obviously a lot more questions to be asked, including whether existing residents will accept seeing their environments densified in this way, and Editions & Séminaires is thus holding a seminar on this question on December 11th (a few days after the public enquiry closes) with the participation of key players including Willy Borsus, Minister-President of the Walloon Region.